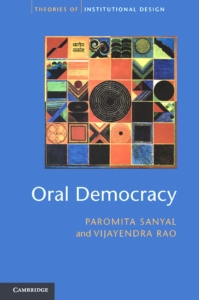 This book studies citizen’s voice in India’s gram sabhas (village assemblies), the largest deliberative institution in human history. It analyses nearly 300 transcripts of gram sabhas sampled within the framework of a natural experiment that allows the authors to study how state policy affects the quality of discourse. The book draws out the different kinds of talk, and the variety of citizen and state performances, displayed in these assemblies. The analysis shows that state policy can have a major effect on the quality of State-citizen interactions by strengthening deliberative spaces. It shows that, even under conditions of high inequality and illiteracy, gram sabhas can create discursive equality by developing the “oral competence” of poor people and give them the space to articulate their interests. The book concludes by inductively developing the concept of “oral democracy” to help better understand deliberative systems in non-western, and poorer, countries. 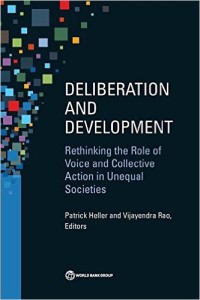 “Deliberation and Development is a true landmark that establishes, surveys, and celebrates a rich field of study with crucial practical relevance. The striking and sometimes counterintuitive insights formulated by its contributors concerning the broad reach of deliberation should prompt rethinking of crucial questions in development, as well as reformulation of key aspects of the theory of deliberative democracy.” —John Dryzek, Australian Research Council laureate Fellow and Centenary Professor at the Centre for Deliberative Democracy and Global Governance, University of Canberra.

This book marries two fields that rarely converse with one another: deliberative democracy and development studies. The study of deliberation has emerged as a critical area of study over the past two decades. Concurrently, the field of development has seen a spurt of interest in community-led development and participation premised on the ability of groups to arrive at decisions and manage resources via a process of discussion and debate. Despite the growing interest in both fields, they have rarely engaged with one another. This book, which brings together new essays by some of the leading scholars in the field, deepens our understanding of participatory decision making in developing countries while initiating a new field of study for scholars of deliberation. In the process, it sheds light on how to best design and implement policies to strengthen the role of participation in development. Contributors: Arjun Appadurai, Gianpaolo Biaocchi, Peter Evans, Archon Fung, Varun Gauri, Gerry Mackie, Jane Mansbridge, Paromita Sanyal, JP Singh, Ann Swidler, and Susan Watkins. 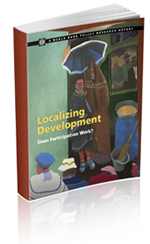 “There are fundamental reasons to see the World Bank’s report Localizing Development, by Ghazala Mansuri and Vijayendra Rao, as one of the most important books on development in recent years,” ROGER MYERSON, Nobel Prize Winner in Economics -2007, Professor of Economics at the University of Chicago. See Professor Myerson’s full commentary on the book.

Abstract: The Policy Research Report Localizing Development brings analytical rigor to a field that has been the subject of intense debate and advocacy, and billions of dollars in development aid. It briefly reviews the history of participatory development and argues that its two modalities, community-based development and local decentralization, should be treated under the broader unifying umbrella of local development. It suggests that a distinction between organic participation (endogenous efforts by civic activists to bring about change) and induced participation (large-scale efforts to engineer participation at the local level via projects) is key, and focuses on the challenges of inducing participation. The report provides a conceptual framework for thinking about participatory development and then uses this framework to conduct a comprehensive review of the literature. The framework develops the concept of “civil society failure” and explains its interaction with government and market failures. It argues that participatory development, which is often viewed as a mechanism for bypassing market and government failures by ”harnessing” civic capacity, ought to be seen instead as a mechanism that, if done right, could help to repair important civil society failures. It distills literature from anthropology, economics, sociology, and political science to outline the challenges for effective policy in this area, looking at issues such as the uncertainty of trajectories of change, the importance of context, the role of elite capture and control, the challenge of collective action, and the role of the state. The review of the evidence looks at a variety of issues: the impact of participatory projects on inclusion, civic capacity, and social cohesion; on key development outcomes, such as income, poverty, and inequality; on public service delivery; and on the quality of local public goods. It draws on the evidence to suggest several recommendations for policy, emphasizing the key role of learning-by-doing. It then reviews participatory projects funded by the World Bank and finds the majority lacking in several arenas – particularly in paying attention to context and in creating effective monitoring and evaluation systems that allow for learning. 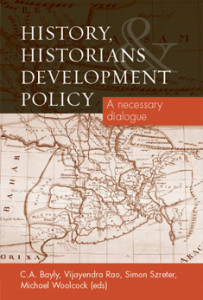 If history matters for understanding key development outcomes then surely historians should be active contributors to the debates informing these understandings. This volume integrates, for the first time, contributions from ten leading historians and seven policy advisors around the central development issues of social protection, public health, public education and natural resource management. How did certain ideas, and not others, gain traction in shaping particular policy responses? How did the content and effectiveness of these responses vary across different countries, and indeed within them? Achieving this is not merely a matter of seeking to “know more” about specific times, places and issues, but recognizing the distinctive ways in which historians rigorously assemble, analyze and interpret diverse forms of evidence. This book will appeal to students and scholars in development studies, history, international relations, politics and geography as well as policy makers and those working for or studying NGOs. 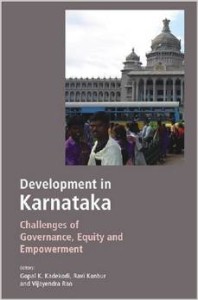 Bringing together contributions from leading scholars, this volume examines the singularly innovative strategy that has been dubbed the “Karnataka Model” of development—one fueled by technological growth and local government reform. Founded 50 years ago, the Indian state of Karnataka has come to embody the challenges and contradictions inherent in a country where gender inequality and regional disparities abound. This collection of astute observations and perspectives provides researchers and policy makers worldwide with invaluable lessons on the trials all rapidly growing nations would be wise to study.

World Development Report 2006 analyzes the relationship between equity and development. The report documents the persistence of inequality traps by highlighting the interaction between different forms of inequality. It presents evidence that the inequality of opportunity that arises is wasteful and inimical to sustainable development and poverty reduction. It also derives policy implications that center on the broad concept of leveling the playing field-both politically and economically and in the domestic and the global arenas. The report recognizes the intrinsic value of equity but aims primarily to document how a focus on equity matters for long-run development. It has three parts: Part I considers the evidence on inequality of opportunity, within and across countries. Part II asks why equity matters, discussing the two channels of impact (the effects of unequal opportunities when markets are imperfect, and the consequences of inequity for the quality of institutions a society develops) as well as intrinsic motives. Part III asks how public action can level the political and economic playing fields. In the domestic arena, it makes the case for investing in people, expanding access to justice, land, and infrastructure, and promoting fairness in markets. In the international arena, it considers leveling the playing field in the functioning of global markets and the rules that govern them-and the complementary provision of aid to help poor countries and poor people build greater endowments. 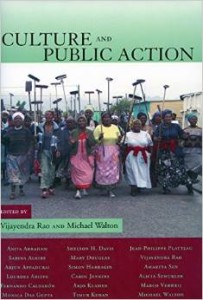 How does culture matter for development? Do certain societies have cultures which condemn them to poverty? Led by Arjun Appadurai, Mary Douglas, and Amartya Sen, the anthropologists and economists in this volume contend that culture is central to development, and that cultural processes are neither inherently good nor bad and never static. Rather, they are contested and evolving, and can be a source of profound social and economic transformation through their influence on aspirations and collective action; yet they can also be exploitative, exclusionary, and can lead to inequality.

The observation that cultural norms affect economic development has been made repeatedly, yet it has been very hard to use it effectively, whether for policy or for prediction. The essays in this volume present authoritatively the present state of knowledge and point out new aspects, which hold out the prospect of greater usefulness.

—Kenneth ArrowWinner of the 1972 Nobel Prize in Economics, Stanford University

This impressive collection of essays combines outstanding theoretical essays on the complex interrelation between culture and development with well-researched case studies that ground these observations in the everyday reality of the poor. The book does not seek to resolve all debates on these issues, but rather asks what kinds of agreements are possible that will yield insights to move public action in meaningful ways. It is an invitation to go beyond polemics and to deepen our stakes in the dialogue between anthropology and economics. The introduction and conclusion by the two editors are models of clarity and hospitable thought.

This book provides us with valuable insights into the relationship between culture and development, and with practical advice on the implications of this for development policy. It should be read by all who are interested in reducing poverty and deprivation in our increasingly interconnected world.

If the big question of the 20th century was between planned and free economies, the big questions of the next century will be understanding how cultures change and can be changed, how social and cultural capital can be nurtured and developed, how destructive cultural conflict can be turned to healthy cultural competition.

People who think about global development are out in the front in thinking about these matters.  (I’d recommend…..”Culture and Public Action” edited by Vijayendra Rao and Michael Walton.)  But the rest of us will catch up soon.

The conception of culture in the Harrison-Huntington volume is a static one, whereas the approach that underlies the work contained in Rao and Walton’s book is of culture as being inherently dynamic, always in process, always subject to contestation. Their understanding deserves to be quoted in full. Though they say that they ‘hesitate to privilege one definition over another’, they take the view that culture is essentially about relationality:

… the relationships among individuals within groups, among groups, and between ideas and perspectives. Culture is concerned with identity, aspiration, symbolic exchange, coordination and structures and practices that serve relational ends, such as ethnicity, ritual, heritage, norms, meanings and beliefs. It is not a set of primordial phenomena permanently embedded within national or religious or other groups, but rather a set of contested attributes, constantly in flux, shaping and being shaped by social and economic aspects of human interaction (p.4)

2022, Money vs Kudos: The Impact of Incentivizing Local Politicians in Rural India

2022,Qualitative Analysis at Scale: An Application to Aspiration in Cox’s Bazaar, Bangladesh

2022, Can Economics Become More Reflexive? Exploring the Potential of Mixed-Methods